I ordered some small parts from Wildman and two days later they were on there way, you can always expect that from Wildman. What was not expected was the package was lost in transit and the Currier was not much help. 14 days later I sent one email to the Wildman and asked if he could help with this, two days later I received a email from Tim and a new package was on its way. Three days later it was at my door step. One email, that is outstanding costumer service. Thank you to Tim and the Wildman Teem.
Regards
Mark Cassola
TRA# 07580 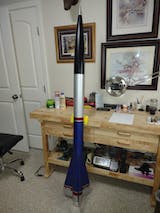